Disclaimer: I will receive an annual Strava Summit subscription and Strava merchandise to review as part of being a BibRave Pro. Learn more about becoming a BibRave Pro (ambassador), and check out BibRave.com to review find and write race reviews!

Strava is a free platform where you can track or add your runs, bikes, and swims. In short is is a social media platform for endurance athletes. You can also join virtual clubs and challenges if you are the type of person that finds extra motivation that way- I know I do! You can like each other’s activities (it’s called giving kudos) and write comments on them, similar to Facebook and Instagram.

You can also add photos of your runs (I’m known to share  photos of my beautiful Lake Michigan lakefront runs :P) You can also find new routes, which is especially useful when traveling/running in a new location.

How Can I get Started on Strava?

All you need to do is create a free account with a valid e-mail address or your Facebook account-it’s that easy. You do not even need a smart watch to use Strava. Something I did not know until this summer. But a lot of people connect their activity trackers to Strava anyway, especially in the running community (So many of us are rarely seen without our Garmins, even on dates. haha). I’d also recommend downloading the free iPhone or Android Strava App, so you can upload or track activities, and give kudos on the go. 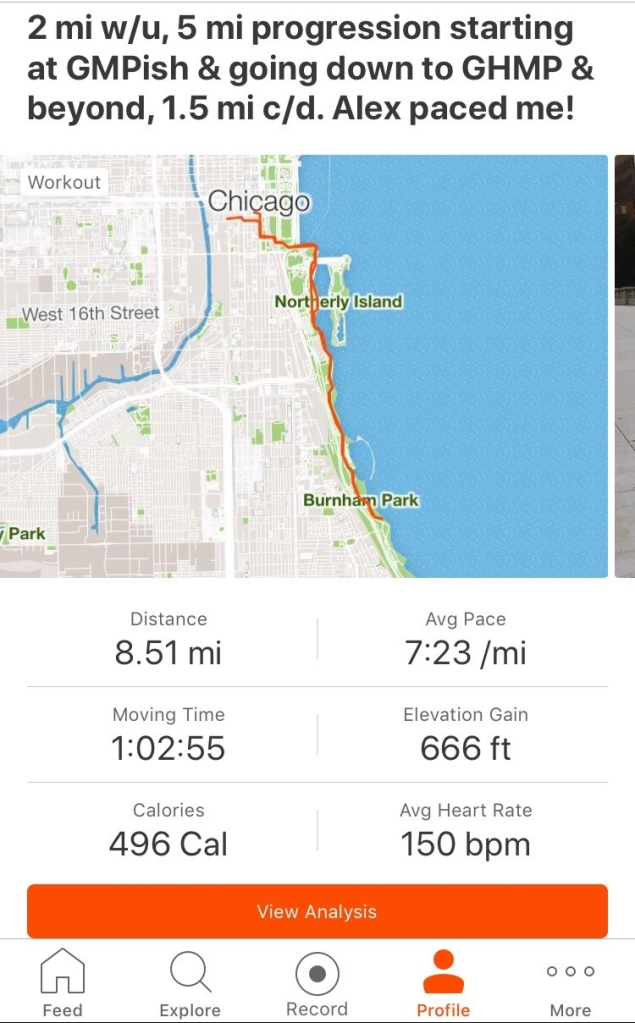 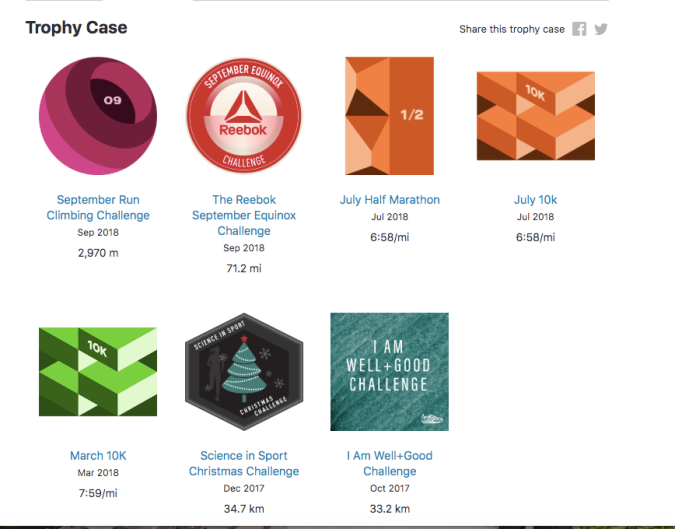 So what are you waiting for? Join Strava today! Or if you are currently on Strava share your profile below if you want me to follow you!

Disclaimer: I’m reviewing the I Love the 90s 5k as part of being a BibRave Pro. Learn more about becoming a BibRave Pro (ambassador), and check out BibRave.com to review find and write race reviews!

When BibRave gave me the opportunity to run a new-to-Chicago race called I Love the 90’s 5k, I knew I could not turn it down! As a 1992 baby, the 90s hold some special memories. And yes, I know I was 8 at the turn of the century, BUT I still have many memories of scrunchies, overalls, choker necklaces, crop tops, and, of course, Gameboy!

Anyway, let’s discuss the 5k race! I was not sure what to expect going into this race. Since it was a new race, I thought I may have a shot at placing in my age group, but I also had not been doing 5k targeted speed work, so I did not put any pressure on myself. Furthermore, my true goal race is the Chicago Marathon and the Rock N Roll Chicago half is my “check-in” race, so I’ve been running some serious (for me) mileage. I had been in the 50 miles per week range going into this race and the legs were feeling tired, so I just told myself to give it the best effort I could.

I was lucky that my husband and sister-in-law were willing to spectate and warm-up with me since I did not know anyone going into the race. We ran around 1.10 miles  for my warm up and then I made my way  to the start line. I put an extra scrunchie on my wrist, tightened my hat, chit chatted with people at the start line and then the racing gun went off…

After the first 400 m it was clear I was going to be running a lot of the race solo. Two guys pushed ahead, then me, and then a sizeable gap before the next group of people. Had I known it was going to stay like this most of the race I would have pushed harder to be near the top two guys, which I think I could have done…but more on this later. 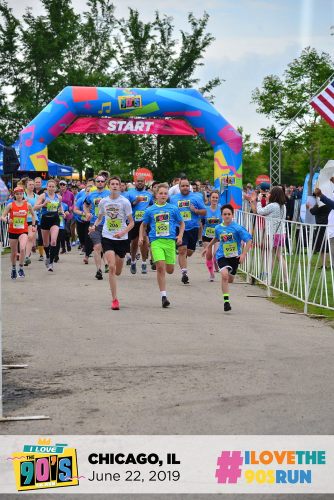 The first mile passed pretty unremarkably. I kept the two top guys and the lead biker in my view and ran a 6:09. I was going for a 6:10, so I was happy with it. I’m guessing the two leaders went out around 6 minute pace. I was feeling decent, despite my high mileage week. Soon after the first mile I saw my husband and sister-in-law. They cheered for me and snapped the photo below.

Then, mile 2 was the most eventful mile by far. For those of you that know me in real life, the next set of events will come as no surprise. 😛 I was in 3rd place overall in the race and the two lead guys had gained some ground on me, so I could no longer see them or the lead biker. I came to a cross roads just before mile 2 and the arrow on the ground was partially etched away, so it was not clear if it was indicatin to go straight or to turn right…I guessed and started going straight as I screamed out “which way do I go?”, but heard no response because no one was near me… I had a sinking feeling I was going the wrong way and about 15 seconds later I looked behind me and saw in the distance the 4th place person (a guy), go right by that arrow. I quickly sprinted back toward the crossroad and made a right to go back on the course successfully adding on approximately 25 seconds to the race official 2nd mile (my watch hit the 2nd mile in 6:23). I was feeling frustrated that it was not clear where I was supposed to go and now I was in 4th place… I later hit the 2nd mile on the race course around 6:45. I was also feeling frustrated because I think I could have stuck closer to the top two guys and then I wouldn’t haven’t gotten confused at the cross roads, but I (falsely) figured they were running around 17 minute 5k pace, which is not the shape I was currently in. The photo below details how I was feeling.

I vowed to put my 2nd mile behind me and just focus on the final 1.1 miles I had left and give it my best effort. About 200 m into mile 3, I passed the 4th place guy and was once again in no-(wo)man’s land running all alone. Thankfully the rest of the arrows were clear and I even saw a race photographer on some sort of electric scooter, which made me smile. Around 300 meters to go I saw my husband and sister-in-law, and told myself I was going to have to really kick it in to still be under 20 minutes with my course mishap during mile 2. I knew my true time was in the low 19 minutes, but what could I do, except kick at this point? I was determined as you can see from the photo below. 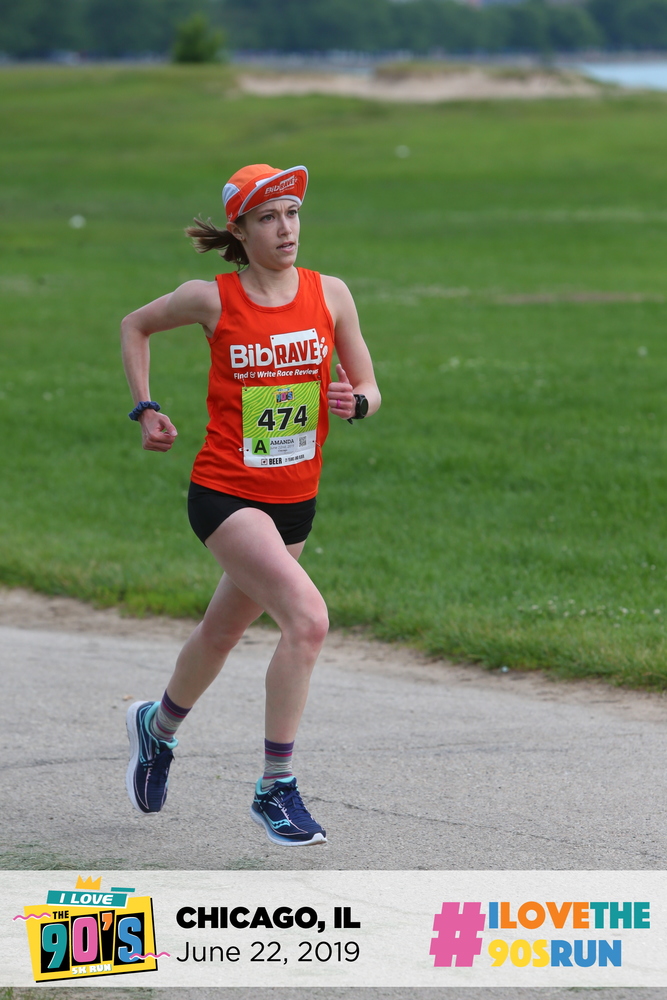 I hit mile 3 at 6:25 according to my watch… And then I saw finish line in the distance and felt confused when I saw an unbroken tape. I knew I was not going to be the winner, there were two guys for sure ahead of me. Then I realized it was for me, because I was the first place female! I tried to sprint it in even more as I approached the tape and put my hands up because I had never broken a tape before and that’s what I saw all the pros do when they won a race. 😛 I ran 5:40 pace for the last 200 m, which is not really a sprint (for me), but I tried, okay?!

Regardless, I was 1st female and 3rd overall, which is pretty cool! And if anyone is interested, my 5k was actually around 19:28… 😛 I calculated that by putting in my Garmin pace to a pace calculator as seen below. 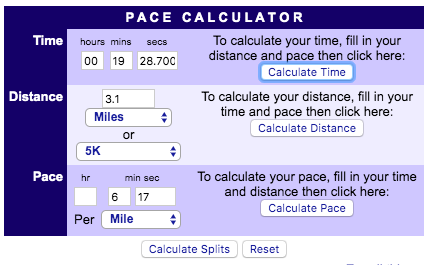 When I found out 2nd place was 19:04, I thought to myself that I could have run that time or pretty darn close. Usually I don’t go out with the very lead guys in a race because the lead guys are typically under 17 minutes and I am certainly not in that kind of shape right now. But, what I do know, is that it is harder to push yourself when running alone, which is what I did most of the race and you just have to do your best! I probably would have had a more successful race (and would not have gotten confused during mile 2) if I stuck with those 2 guys. But oh well, I still had a fun race! 🙂 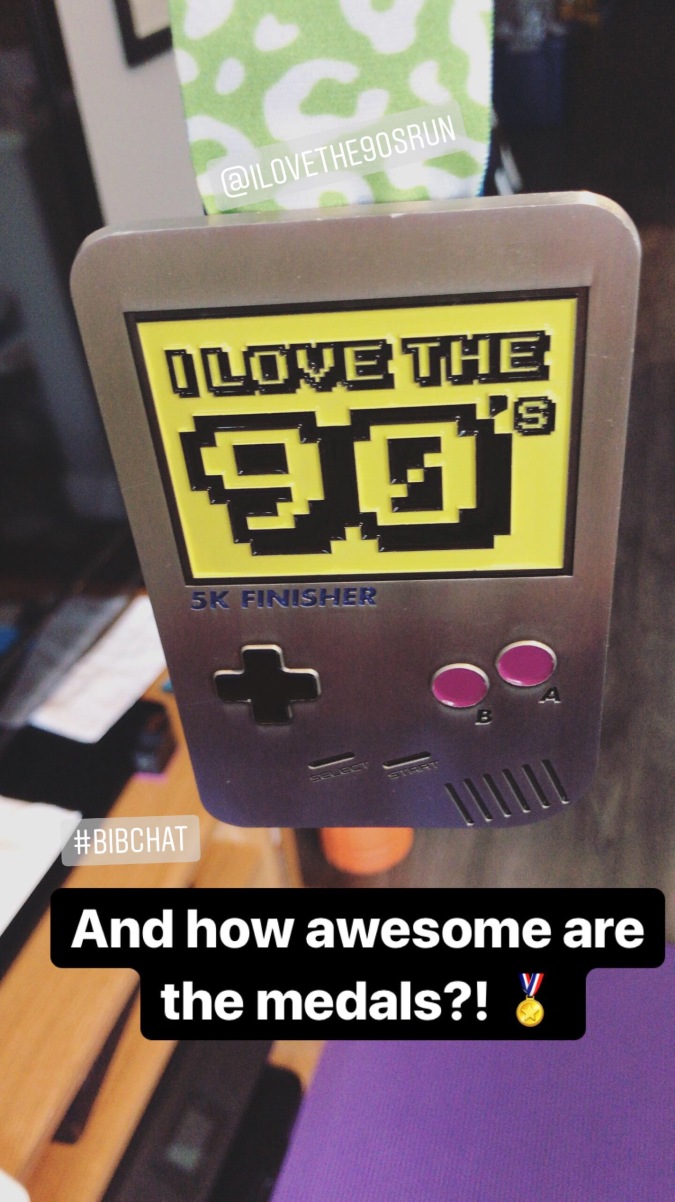 Overall,  the race was awesome! The medals were cool, there was a costume contest for the best 90’s costume, and I won a free entry for next year, so I can try to defend my title. haha. Plus, the other top two females were super sweet and it was fun to meet them and take a photo with them at the awards ceremony. I also loved all the 90s music on the course and at the awards ceremony-I still have Barbie Girl in my head weeks later 🤣 I will definitely be back next year, it’s free for me after all 😉 And they will also be debuting their 10k race next year, if you are into 10ks more than 5ks! 😛

Did you run the I love the 90’s Chicago 5k or do you plan to do one of their races in a different city!? If not, want to join me in Chicago next year?!