Disclaimer: I received a Road ID gift card to purchase a Road ID bracelet or Sidekick ID of my choice from Road ID to review as part of being a BibRave Pro. Learn more about becoming a BibRave Pro (ambassador), and check out BibRave.com to review, find and write race reviews!

Why was I so excited to try out Road ID? Well, I live in Chicago, and while I rarely run alone (either I run with my husband, friends, a group, or there are often others on the running path), I do not always feel safe. I have been approached by strangers both while running, while commuting, or even just shopping. I’ve been lucky nothing super serious has happened, but these incidents have definitely been a wake-up call for me that it is important to pay attention and take extra safety precautions, especially as a female. I already tell my husband or a friend anytime I go for a run, errands, or commute to school. I carry pepper spray with me anytime I commute to/from school since it’s a long journey and I travel through some areas where I do not feel as safe as usual…But I could not help, but wonder what would happen to me if I passed out or got injured while running or commuting- how would someone help? Enter Road ID- the solution to my problem!

I was excited to test out Road ID from the day I received the gift card and designed my  ID online. I’m a sucker for anything rose gold, so making my ID rose gold was a no brainer. 🙂 And I picked an adjustable bracelet because I have child-size wrists and I usually have to put jewelry on the tightest notch or it will be too big. Thankfully my bracelet fits, but only as long it is on the tightest notch. 😛 And receiving this sweet note above in the mail with my ID was the icing on the cake!

After designing my bracelet I opted to start my emergency profile. This service is free for 6 months after your purchase and then is $9.99 per year after that. A small investment for something so worthwhile. In the emergency profile, I was able to enter my allergies, emergency contacts, and insurance contacts. It only took me 10 minutes and I liked putting information in a secure platform online versus just on my Road ID. All someone has to do is call the “for emergency contacts” number on the wrist ID and then enter the number on the back of the engraved plate to access my profile. This is a safer option (in my opinion) and then it is a much quicker process to get me to a doctor that is covered by my insurance versus having to get my information from my husband or family if anything were to happen. Plus, you can update your emergency profile at any time just by logging on. Obviously, I do not want anyone to ever have to access my emergency profile on my wrist ID, but I have peace of mind knowing that it is up-to-date should anything bad happen to me on a run or otherwise.

Nowadays, I make sure to wear my Road ID anytime I run alone and honestly most times even when I run with others. I’ve even worn it a few times while out and about or commuting to school. It’s pretty cute and it’s a small way to give myself extra safety and my loved ones peace of mind.

RoadID is not only great for athletes, but also a wonderful investment for people with health issues, kids, students, people living in a big city, or the elderly. Plus, right now is a great time to buy one for yourself or as a gift, because they have an amazing Black Friday sale where you can get up to 60% off!

How do you stay safe while running or working out? Do you have a Road ID? If so, why did you get one?

Disclaimer: I’m reviewing the Hot Chocolate 15k as part of being a BibRave Pro. Learn more about becoming a BibRave Pro (ambassador), and check out BibRave.com to review find and write race reviews!

BibRave was kind enough to give me an entry to the Hot Chocolate 15k on Sunday, November 3, 2019, so I could run it for the first time! 🙂 I know I’ve lived in Chicago for 5 years and it’s a little sad I have not run it, but if you are a long-time reader of Black Bean Queen you know that I have spent my fair share of those years injured… Anyway, let’s discuss the race weekend! 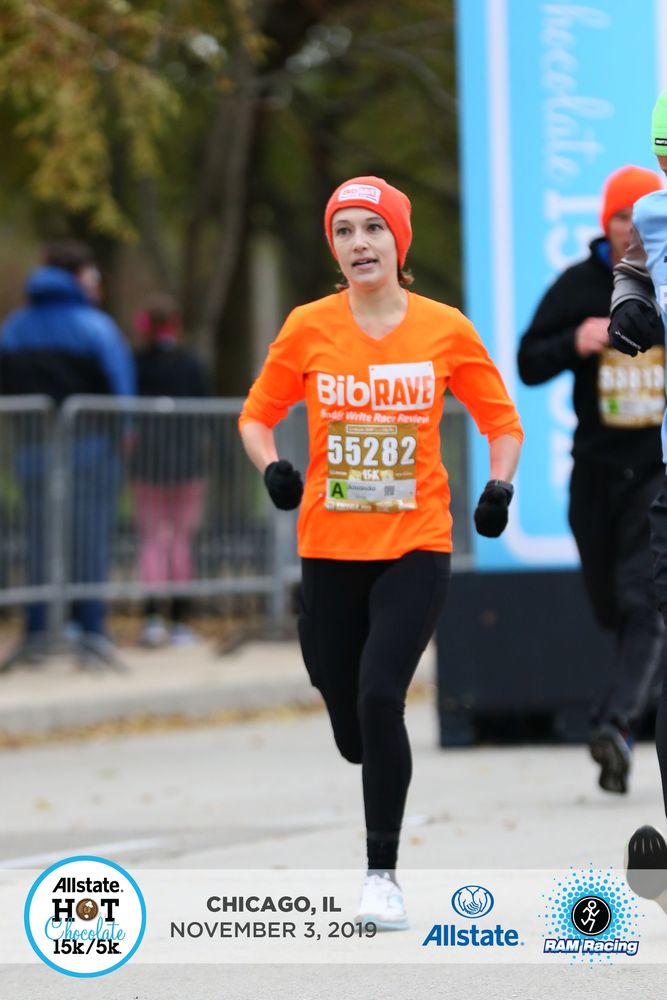 I went to packet pick-up on Saturday morning with my friend Emily after our team long run and brunch.  I only ran 6 miles easy since I had not been running much in the nearly three weeks since the Chicago marathon. The packet pick-up was at McCormick Place and it was not as crowded as we expected. Neither of us were in the mood to go to every booth, so it was just a quick trip to grab our packets and do one lap. I also picked up my friend Meghan’s packet so she would not have to come all the way to Chicago two days in a row. I’m nice like that. 😛

Emily and I after the race!

I woke up at 4:30 am, ate my usual lonely packet of oatmeal, and then changed into BibRave gear for the race. The race was in Grant Park, which is within a mile of where I live, so I was happy I did not have to leave hours before the race. I did have to leave somewhat early to give Meghan her packet and run a warm-up with her, though. I met her and her husband at a Dunkin Donuts. Meghan pinned on her bib, ditched some layers with her husband, and we started jogging to the start line.

I was hoping to find my friend Emily before entering the corrals so we could run the race together. We both planned just to take it at an easy to moderate effort since neither of us had run much since the Chicago Marathon. Emily, unfortunately, got caught up at the gear check and then all of a sudden, the announcer said the corrals were going to close in 10 minutes. I was still with Meghan and naturally, we panicked because we did not want to be forced into wave two. Even though I planned to take the race easier than Meghan, Emily and I still wanted our spot in corral A with Meghan.  Meghan and I started running through crowds of people to make our way into corral A. We made it with a few minutes to spare! I hate being caught behind crowds of people at race start lines- it makes me panic a little (real cute, I know 🙃), so I’m glad we made it into A!

I stayed to the far right of the corral in my bright orange shirt in the hopes that Emily will make it in time and find me. I texted her, but no such luck. Meghan started doing a few drills and stretches while chatting with me. I just stood there fixing my shoelaces and checking my phone to see if Emily was coming, so not really doing anything to help my race preparation. 😛 Meghan suggested that even though I’m coming off a marathon and haven’t really been running, why don’t I just try to run with her since Emily wasn’t going to make it in time? She thought I could do it! I wasn’t so sure, but I said hey I guess I’ll just try to stick with you as long as I can…

Meghan and I after the race!

Suddenly the starting gun went off and we easied into the race. For the first few miles, Meghan and I were literally chatting, laughing, and not taking ourselves too seriously, while still running a solid effort. Our pace was good, around 6:50/ mile and it was pretty windy. I surprisingly did not feel very winded. We hit the 5k around 21 minutes and it honestly felt more like a 23-24 minute 5k, so I was surprised. And yes we were both wearing watches, but you know how crazy the GPS goes in downtown Chicago, so we were not certain what our actual pace was.

I hung on to Meghan until the 10k mark. That’s when my lack of running post-Chicago marathon caught up to me and I felt tired, so I slowed down. I’m not proud, but sometimes I just don’t want to fight. This was supposed to be a fun race anyway. I spent the 10k- 15k just keeping my cool and hoping to average sub 7 minute miles. I saw my sister-in-law and husband just before the last 400 m and then I made a new friend in that final stretch, so him and I finished together. We apparently ran the same time at the Chicago marathon, so it was fitting in a way to finish the race together (even though I blew up during my marathon and ran much slower than I was capable of running…the marathon and I have some serious unfinished business, but I digress). Although technically he finished about 30 seconds faster than me in the 15k, but must have started further back. Anyway, shoutout to Paul if you somehow read this blog! 😛  I finished in a 1:04:00 (6:53 pace), which was good for 4th place in my age group and about 1 minute and 20 seconds behind Meghan.

It was a pretty cold November day, so I finished the race freezing. I went with Meghan to grab our chocolate goodies, although I did not want to and could not eat them (#veganproblems). Only a big cup of coffee sounded good to me. We waited for our husbands to arrive with more layers and took a few photos. I also finally found Emily, who just laughed at me for not taking the race as easy as I said I would- #typicalAmanda 😛 We did not linger in the post-race party because it was so cold and because of Emily and I had a second race to get to: the November project 13 x 1 mi relay with our Heartbreakers team. The reason I thought it was a good idea to do two races in the same day is a story for another day or check out my instagram post about it.

All in all,  the Hot Chocolate 15k was a fun race. The course was flat, lots of crowd support, and it was well marked. I’d love to run it again when I’m in better racing shape and go for a sub 1 hour 15k!

Have you ever raced the Hot Chocolate 15k in Chicago or another city? If so what did you think?