Hi friends! I hope you all have had a wonderful Tuesday so far. Mine has been filled with a whole lot of nothing…in a good way though! I wasn’t feeling very well so I spent most of the day resting, reading, and watching Netflix. My boyfriend was kind enough to have a Netflix marathon with me.

I highly recommend “Spinning Plates”, one of the documentaries we watched today. It profiles three very different restaurants and gives you an inside look at their ideas, how the restaurants are run, and what inspired their restaurants. One of the restaurants featured in the documentary is Alinea, right here in Chicago. They are rated three stars. the highest Michelin rating given to a restaurant and thus an expensive place to eat. I think it costs over $200 to eat there! Regardless, it was cool to learn about a restaurant not too far from where I live, about the Michelin rating system,  and about what owning/running a restaurant is actually like. I will say Alinea is just a LITTLE bit out of my price range though ;).

Well… sorry for the random tangent about Netflix, now onto what I really wanted to share with you all: a simple stir fry recipe! This stir fry is super easy to make and can be modified in many ways, from the vegetables you use to the protein source you chose. I’ll admit the pictures and recipe are actually from our dinner Sunday, but it’s been a few days since I posted so I thought I’d still share the recipe today. It was my first time using the Wok my boyfriend’s parents got me for my birthday a few months ago and I have to say if you have a Wok, use it! It is much more fun and easier to stir fry in a Wok than a traditional frying pan. This recipe is super easy and takes under a half hour from start to finish, perfect for those busy nights. 🙂

1 can of water chestnuts

1. Clean the bell peppers and zucchini. Peel the zucchini. Chop the vegetables.

2. Prepare the rice as indicated on the package, If using Jasmine rice I recommend 2 parts water to one part rice for tasty “sticky” rice.

3. Put some canola oil in the Wok and turn the heat on high.

4. After a couple of minutes add the veggies to the Wok.

5. Press the water out of the block of tofu and then chop.

6. Add the tofu to the veggie mixture in the Wok and stir fry for a few minutes. 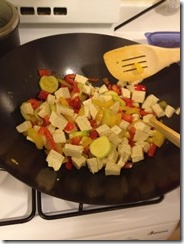 7. Prepare the seasoning as indicated on the stir fry seasoning mix packet (mix the contents of the packet, the sugar, soy sauce, and water together).

8. Add the water chestnuts to the Wok as well as the seasoning mixture once the tofu and veggies have started to brown.

9. Stir fry the entire mixture until thickened (approx. one minute).

10. Serve the stir fry over the rice and add a dash of ginger if desired. 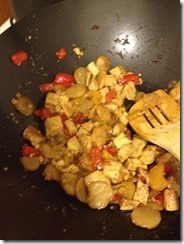 I probably make tofu stir once a week because I like it so much and it’s easy! I think it would be extra tasty with some stir fried pineapple too.  My boyfriend commented that since we make stir fry so much we need to make up our own seasoning mixture and I agree with him 100%. We made a spicier one with jalapeños once, but other than that we usually just use that seasoning mixture. Expect more stir fry recipes in the future as we experiment/try other seasoning combinations/ stir fry recipes! 🙂

Now onto my exciting news!

As some of you already know, I am recovering from a case of IT band syndrome and have not been able to run much for the last month. Well, on Monday, my boyfriend and I went to a local running store to join in on their fun run night. It ended up being a pain free three miler for me! I did yoga before and after the run and rolled out my awful IT band with bruises to prove it, but a day later my IT band is still no tighter than before! Finger crossed, but it looks like after an entire month of no running I’m BACK at it! I’m am still going to take it very slow- running every other day (with cross training in between), but with continued yoga, rolling out, and my IT band rehabilitation exercises I am hoping to be back for good. I long to run further distances and to start training for another race, but I take a completely pain free run as a small victory and that definitely has made my week so far!

Well, friends I hope you all have an awesome night!

What Netflix documentary would you highly recommend? Also, what is your favorite way to season stir fry?