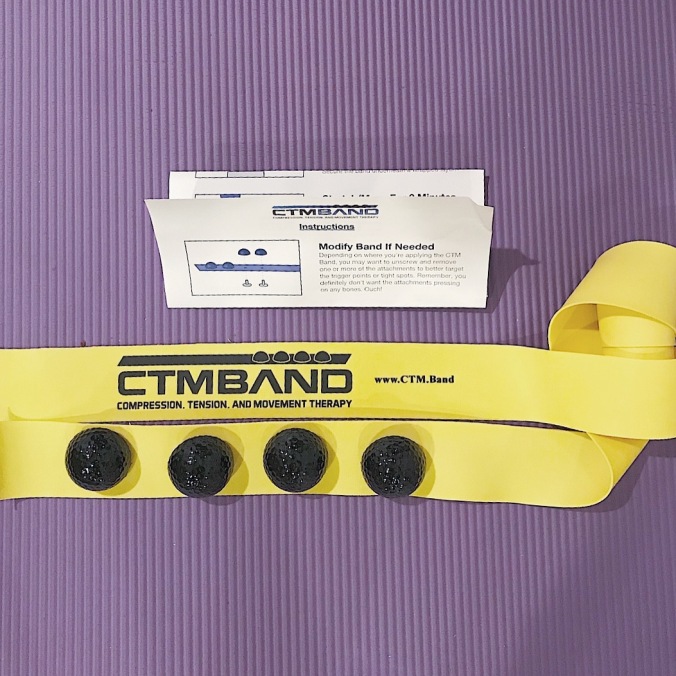 I am not exaggerating when I say that the CTM band has been a life saver and welcome addition to both my and my husband’s training/recovery tool box. 🙂

No other tool that I have at home has brought me as much relief from tightness and soreness (especially with my quads and IT band) as the CTM band. And trust me, as a former collegiate runner with a storied injury history I have tried many, many tools. The stick, the trigger point foam roller, a regular foam roller, a tennis ball, you name it…I’ve likely tried it. The CTM band is the closest at home tool to providing me the relief I would get when I’d go to a Physical Therapist and get the Graston Technique done. The upside of the CTM band: less painful, less expensive, and similar results (sweet, sweet relief, looser tissue, improved range of motion). Check out their website to learn how to use the CTM Band for different injuries, sore spots, and areas of your body.

And I’m not the only one in my household that loves the CTM band! During this marathon training cycle my husband was experiencing the worst quad soreness he has ever had and after two days of suggesting he tried my CTM band he finally caved (he’s running the Illinois Marathon). It was life changing for him! The next day his soreness was a lot better and felt like he had better range of motion during his run. Now he regularly uses the CTM band before and after running. I often have to fight him to use it first if we run at the same time! 😛 I’m even packing the CTM band for our race next weekend (marathon for him and half marathon for me). I think he just needs his own 😉

I also think you should try out the CTM band! Especially because I have a sweet deal for you: the code “CTMBIBRAVE” gets you 20% off your order! So try it out and let me know what you think! 🙂

Finally, don’t just take my word, see what other BibRave Pros have to say about the CTM Band: