Good evening friends! Today I am reviewing the FItbit Flex, which I received as a present from my mom. This product review and the options expressed in it are solely my own and are not influenced by a third party. Even though I run or exercise most days of the week, I feel like all I do after working out is sit. That kind of negates the benefits of working out. Having a way to track my daily steps will hopefully influence me to walk more places and live an active lifestyle outside of working out.

The Fitbit Flex comes with a USB charger, a receiver that you plug into your computer, the Fitbit itself, a small wrist band, and a large wrist band. I have the pink Fitbit Flex.

To use the Fitbit, you make a profile on the Fitbit website and you link it with your Fitbit. I also recommend getting the smartphone app. You can set your daily goal of steps, distance, calories burned, and active minutes. You can also track your sleep with the app. It tracks how long you sleep, when your are awake during the night, and when you are restless during the night. You can even use the Fitbit as your alarm in the morning. It will vibrate on your wrist to wake you up.

You can also set weight, body fat, and BMI goals and manually track them. There is also a food tracker, but I have not used it. I do not like tracking my food intake. I used MyFitness Pal in the past, when I was a DI college runner. It is a good idea, especially for weight loss, but for some people, such as athletes, it can cause them to become a tad obsessive. Am I eating enough? Too much? Am I getting enough protein? ETC.. I fell into the latter category during college so now I do not track what I eat.

I just try to eat healthy most of the time and only when I am hungry. I have no idea how many calories I eat per day to be honest. Not tracking my food intake is working well for me as I have not gained or lost weight since I graduated from college last May!

Here is my day in steps so far today. I did a 25 minute cross training workout on the elliptical at resistance 14 as well as 10 minutes of yoga using the Yoga Studio app. I also walked around a lot today because I went to the Field Museum with my boyfriend’s family and ran various errands: 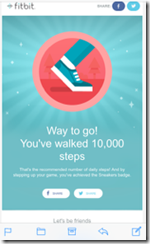 I recommend the FitBit Flex for anyone.  I wish you could manually track more exercise types, but it does the trick for those of us who want to be more active during the day. This may be just the tool you need to park the car further away, take the stairs, walk more places, and be more mindful of time spent sitting during the day. Whether you are a runner, daily exerciser, or coach potatoes the Fitbit can motivate you to take more steps during the day. Every single one of us can benefit from a more active lifestyle! 🙂

Do any of you have the Fitbit Flex or another Fitbit? What do you think about it?